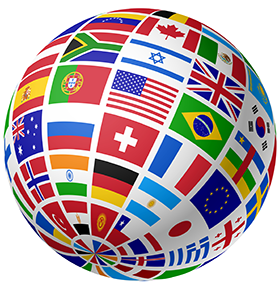 There is no other sport that gives our youngsters as much exposure to the many different nationalities on this planet as soccer does. It’s not even close.

When one of our youngsters follows, say, Manchester United or Real Madrid or Bayern Munich then he/she is being exposed to England, Spain, and Germany.

When our youngsters watch Messi and Neymar they will sooner or later learn that they grew up in Argentina and Brazil, which in turn might make them more tuned into information and news about those countries.

When our youngsters watch the World Cup and see our team play against Japan or China or Australia then they are being exposed to the wider world.

When one of our youngsters sees another wear an international soccer jersey at school it exposes them to a little bit of what’s out there.

Or from talking and interacting with teammates that have international backgrounds during practices and games, and socially during tournament weekends.

When a youngster has to pick a research project at school he or she might decide to research the geography and/or history of Italy because of an interest in AC Milan or Juventus. Or Spain because of FC Barcelona.

More of our kids know about that small country in Europe called The Netherlands because of Cruyff, Robben, Van Persie, and Sneijder. And maybe from first being exposed to them while watching their demolition of Brazil during last year’s World Cup game for third place.

They might start to read more about those leagues and countries. They will feel more familiar with those cultures.

I am convinced that this exposure through soccer for many youngsters creates at least some curiosity about what’s going on outside our own arguably relatively inward looking society.

And it’s by and large a healthy, positive exposure to different societies around the world. Where else can youngsters get this kind of positive exposure? Historical text books covering past conflicts in school? Latest news about terrorist attacks? Natural disasters in Japan or Chile? Negative stereotypes during their day-to-day lives?

My wife and I want our children to grow up with at least some global perspective to help them be more successful in an increasingly global society and, in our experience, soccer definitely helps nudge that in the right direction.

We hope the beautiful game does the same for you!