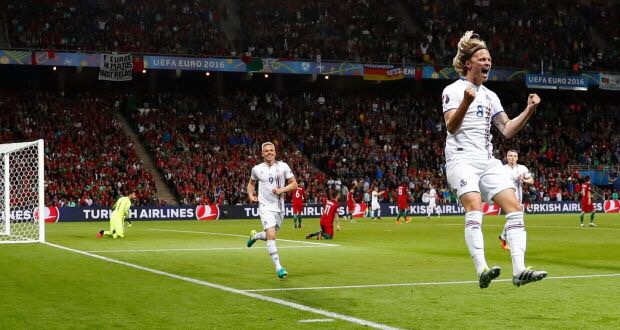 Iceland, with only around one-third the population of San Jose (!), played Cristiano Ronaldo’s Portugal to a stunning 1:1 draw in the European Championships yesterday.

And this wasn’t a one-off fluke. To qualify for Euro 2016, Iceland beat World Cup semifinalists The Netherlands home and away (!) and took the maximum six points from home games against Turkey and the Czech Republic, both strong soccer nations.

And another shocking fact: Iceland only has 20,000 (!) registered soccer players. How many do we have? Around 5 million are registered with U.S. Soccer and around 25 million Americans play soccer.

The Icelandic soccer federation works hard to ensure that practically all coaches have either a UEFA A or B coaching license, the highest coaching qualifications in the world, apart from the UEFA Pro license needed to manage/coach European pro clubs.

And this license is used even for teaching kids as young as six. If you don’t teach well from the beginning it is very difficult to teach the fundamentals later and difficult, if not impossible, to build further on a weak foundation.

Iceland has around 200 UEFA A-qualified coaches and around 600 B-coaches – one for every ~50 registered kids!

And then from age 14 or 15 the top talent is encouraged to move to the continental European youth academies.

So it isn’t a lack of athletes or money or facilities that’s keeping us from fulfilling our potential. We have all the resources we need (and more) to become a global soccer powerhouse.

But our human capital isn’t where it needs to be. At least three issues are arguably holding us back in my view:

First, we need many more qualified coaches that truly understand the game at the deepest level and can teach it. And we need better coaches to teach our youngest kids so they have solid fundamentals in place by the time they turn 10. And we need to teach technical skills, creativity, and soccer IQ. We need ‘complete’ youth players that enjoy the game and are willing to take risks and experiment.

Second, we need to discover and then nurture our talented underprivileged and economically disenfranchised youth players. Our expensive pay-to-play model works against finding and developing our best talent. More on this topic in another blog post shortly. Note that youth soccer is free for anyone in Iceland…and Germany, Spain, Portugal, Brazil…the list goes on.

Third, we need many more kids to play the game every day during school breaks and after school in neighborhood parks. We can’t expect to have players that can compete with the best in the world when all our younger kids do is go to structured one-hour practices twice or three times a week.

There’s more we need to do, no doubt. But these three are obvious to me.

We have no excuse!

5 thoughts on “We have no excuse! Tiny Iceland’s soccer miracle.”