Please leave a comment at the end of this post if you know of any more futsal clubs, leagues, and/or tourneys so I can update this post. It would be great to make this list as complete as possible. Thank you!

Tens of thousands of kids across NorCal are getting ready for the winter futsal season. Most of the clubs mentioned below offer year-round futsal programs, but there’s definitely a huge surge during the winter months when the outdoor soccer season slows down.

I can’t say this enough – you MUST try futsal. Your sons and daughters are almost certainly going to have a blast and will learn a lot too. It’s excellent for player development. And you will enjoy watching the games – there’s much more action than outdoor soccer and your son/daughter is in the middle of the action pretty much all the time – there are only four field players per team.

If these clips don’t convince you then I don’t know what will: FIFA clip on futsal and superstar Falcao and this compilation of futsal skills.

You don’t have to join a futsal club or be part of one of our soccer clubs to participate – many futsal teams are coached by volunteer parents with soccer background. Simply pull a group of seven to nine outdoor teammates or friends from different outdoor clubs together, register your team, and go play.

Futsal Kingz – skills and fun for all levels and age groups, both boys and girls, across various locations in the South Bay. Tim Newsome and his team are GREAT! I can’t recommend them enough. Sessions and camps year-round, both competitive and recreational. Also compete in tournaments, most recently winning U.S. Futsal Nationals in the U8 and U9 age bracket.

World United Futsal Academy (WUFA) – competitive futsal mostly for boys, but girls are welcome too. Led by Vava Marques, USA National Futsal Team Coach, who grew up playing the game competitively and pro in Brazil, and Daniel Berdejo-del-Fresno, who grew up in Spain and most recently was the Head of Coaching & Sports Science at the International Futsal Academy in England and since 2010 on the coaching staff of the England Futsal National Teams. Daniel also wrote a free book on futsal coaching. 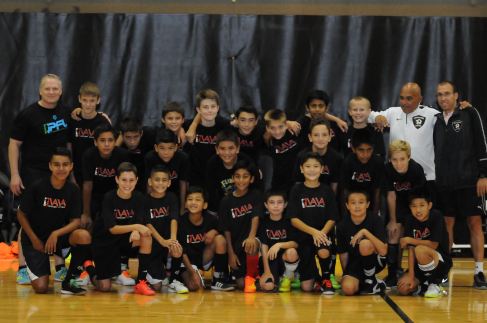 Legends Futsal in Central and South San Jose. One of the oldest futsal clubs in the Bay Area. Very competitive across all age groups for both boys and girls. Also now have a semi-pro mens team I believe.

There are lots of futsal camps and weekly drop-in practices, plus futsal coaching workshops. Some outdoor soccer clubs such as De Anza Force, Red Star, LFC Bay Area, San Juan SC, and Lamorinda SC organize in-house futsal activities too, but I’m not listing those here. Some of these are small-sided games played on turf, so make sure you confirm if these clubs offer real futsal.

Futsal San Jose – this league is the most popular in the South Bay/San Jose area. Hundreds of teams across all age groups, both boys and girls, compete from the first weekend in December to end-February. This league uses a clever ranking and game scheduling system that matches teams based on previous weekends’ game results. Sign up now!

Stanford-Palo Alto Futsal League – teams compete in January & February. This league is organized by Vava Marques from WUFA (see above). Teams are grouped by age and ability. Sign up now!

San Francisco Futsal League – organized by SF Recreation & Parks and played at 13 centers across the city from January to March, U5-U18 boys and girls teams compete in recreational, intermediate, and advanced divisions. Note that the city website refers to ‘indoor soccer league’, but it’s futsal.

NorCal Futsal League – based in Martinez.

Mustang Futsal League – based in Danville. Organized by Mustang SC but open to all.

Marin Futsal League – based in Mill Valley. One of the longest-running and largest futsal leagues in NorCal. Also have a Facebook page here.

Also, this webpage lists leagues and clubs including some that aren’t listed above. Some of the information seems to be out of date though.

U.S. Youth Futsal Northern California Regional Championships – December 3/4 in Rocklin, CA. Only four weeks to go if you’re interested – sign up now! Winners of this tourney can compete at Nationals in Kansas Feb 17-20.

Keep in mind that the above two Nationals don’t actually attract the various Regional/State Champions from around the country because youth teams are not (yet) willing to travel far (and incur the cost) for futsal. So Regionals can often be more competitive than Nationals. This will change over time with futsal’s continuing growth.

By way of background, U.S. Youth Futsal and U.S. Futsal are the two competing national futsal organizations. My understanding is that both have the same status with the U.S. Soccer Federation, and that USYF is stronger on the East Coast while USF is stronger on the West Coast.

Please leave a comment below if you know of any more futsal clubs, leagues, and/or tournaments. Thank you!

5 thoughts on “Where to play futsal in NorCal”