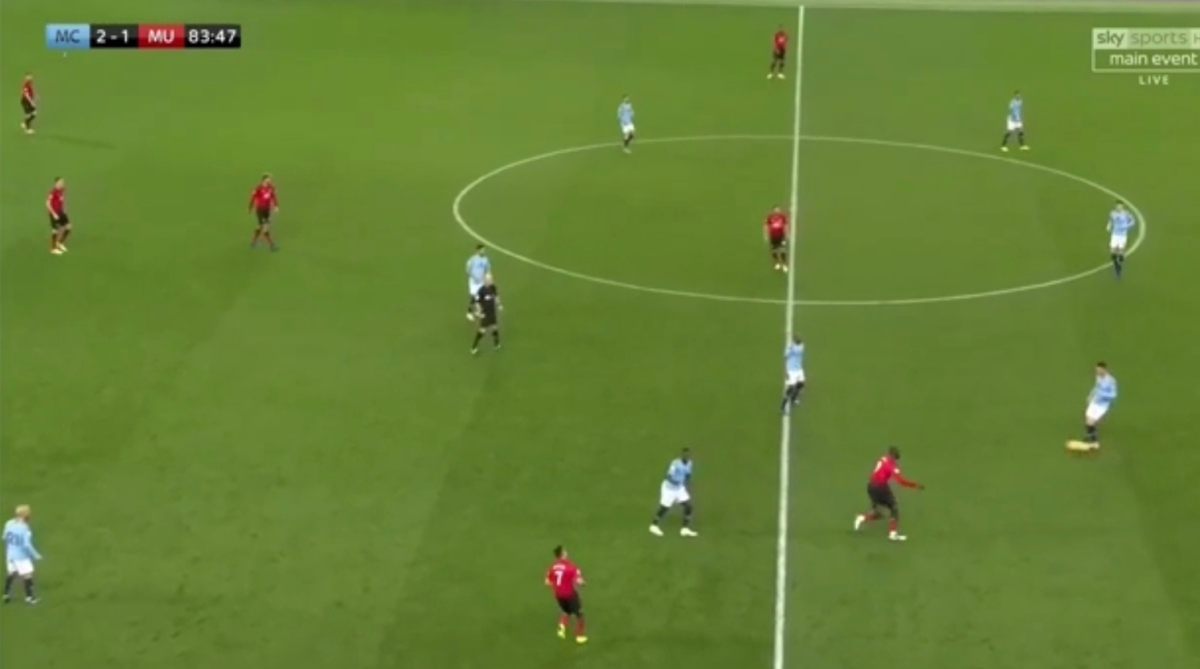 …time and space. It sounds so simple, yet it’s so very difficult to understand and master. Few players, coaches, and spectators, including at the professional level, truly understand this. And even fewer know how to teach it.

Before we continue, watch this 70-second gem of a clip demonstrating how Pep Guardiola’s Manchester City dominated Manchester United on Nov 11, 2018, through a superior understanding of time and space. Overlaid on this recording are some of Pep’s instructions to his players from a documentary on his work at Manchester City.

At the most fundamental level, players have to pass, move, dribble, faint, etc. to manipulate and shape the space and time available to them, their teammates, and opponents, with the objective to score goals and to maintain possession.

Maintaining possession gives teams a tactical advantage because it allows them to shape the game and reduce the time available for the opposition to score. And the reason for immediately pressing the opponents on loss of possession is to quickly restrict the space available to them before they can shift from a defensive stance into an attacking mode. It’s easier to win the ball back in the seconds after a loss of possession while the opponents are still adjusting.

At the individual player level, moving to create a passing option for your teammate or to pull an opponent away from a specific area of the field are examples of shaping and creating space. Passing to ‘break the lines’ is another example of this.

Players manipulate time through, for example, the timing and pace of decision making, passing and touching the ball. For example, if players aren’t passing at pace to ‘switch the field’ then the opponents have more time to shift across and close the space that the switch is meant to exploit.

Take a look at these four examples from a recent Liverpool v Arsenal game. Note the smart, confident, and synchronized manipulation of time and space using the various approaches described above. There is very clear purpose to everything the players are doing…this isn’t just quick passing of a hot potato to simply retain possession.

How often do we see youth players ‘safely’ pass backwards to avoid taking risks and losing the advantage that forward movement of the ball and teammates could have given the team? How often do we see one-dimensional youth players that have no confidence to take on players probably because they get chewed out by their coaches if they fail? How often do we see top youth players with no idea how to smartly move off-the-ball to support a teammate with the ball or how to exploit newly created space or when and how to pull opponents into areas of the field to effectively neutralize them?

And just as important are the mental abilities of the player. A split-second, accurate perception of the micro-moment and then quick execution of an appropriate action is essential. Some players are innately better at visual/spatial perception and processing, for example. And the players that have put the work in to learn skills deeply enough to execute actions intuitively and instinctively gain an enormous reaction and accuracy advantage.

Finally, it’s the player’s state of mind that is also crucial. For example, a player who tends to be anxious or distracted will be at a big disadvantage – the former will, for example, take too long to make decisions and won’t commit fast enough to the next move, and the latter’s perception and processing of the situation will be much slower than opponents that are focused.

Modern (European) soccer is now firmly grounded in the principles of learning to control and manipulate time and space. ‘Playing out from the back’ is one example of that and it’s the hallmark of youth teams with coaches that are teaching the kids the right way to play the game.

Unfortunately, too few parents and youngsters have the appreciation and patience and commitment to learn to master the beautiful game at this deeper level, especially since there will be many more losses than wins during the early years.

That said, through my officiating I’ve seen many more youth teams play a possession style of soccer here in NorCal these last 12 months, including building out from the back. I very much hope that this change is permanent.